The Partridge Family were neither partridges nor a family. Discuss.
Post Reply
55 posts

I had some fun creating a little so called cracktro for your pleasure, it most prominent feature being the .mod replay routine in it (it has music!). Enjoy! Source on https://github.com/TheRealByteraver as always, it ain't cleaned up though as I really hacked this together in a few days. I attached a screenshot so you'll have an idea what it's about. Unpack the attached file and double click the "modplay.exe" file to start the replay. 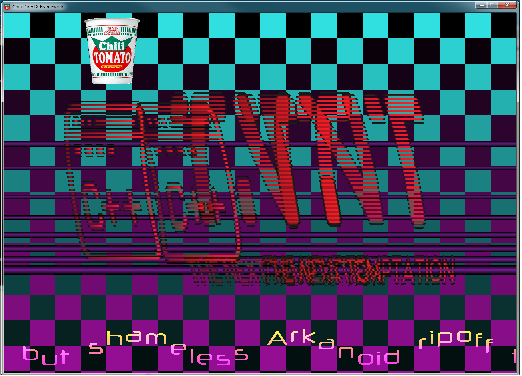 Holy balls, the scrolling text on the bottom goes on for days. Nice effects and nice choice on the music.
If you think paging some data from disk into RAM is slow, try paging it into a simian cerebrum over a pair of optical nerves. - gameprogrammingpatterns.com
Top

haha, the full text is in the file https://github.com/TheRealByteraver/RTS ... ne/intro.h if you don't want to wait for the scroller to finish

. The major accomplishment here is the music replay routine, which took years to make. My first attempt was in Borland Pascal 7 and assembler, in the late nineties. At that time you still needed to write your own soundcard drivers, control the DMA and interrupt controllers directly etc. It could play .mod files only, on the legendary GRAVIS Ultrasound and the shitty SoundBlaster family of soundcards.
Top

Oh my, this is quite FABULOUS. Thanks for sharing

You could probably make your mod player play streaming at runtime via XAudio2, would be a sweet little project.
Chili
Top

2 fucking good...
I hope this will get featured in your game or maybe added to project twin or something.
Kraut
Top

Glad you like it. It is actually the intro of the game, the rest of the game is just not accessible in this version.
I succeeded in making it take proper use of the WAVE_MAPPER device this WE, thanks to David Overton for his great tutorial on the windows Wave Mapper functions (http://www.planet-source-code.com/vb/sc ... 2&lngWId=3).
So the mod/s3m/... player is now happy with about 3 MB of ram and no longer stops playing after 16'.

I will have a look at using XAudio2, some guy on youtube made a tutorial about it

Looking through the code, you're right it is a mess

You must have either worked on this months apart or had some copy/paste fun with code snippets around the internet. There's a lot of mixing between C and C++ code.

Since you are only looking for inequality, stringList_[ currentRow_ ] != sectionStr would have done just fine. The second one using the C library strcmp I see why it's used since strBuf is a char array, but strBuf could have been an std::string. You also use a lot of pointer arithmetic instead of using iterators, while debugging using iterators can be safer since they provide bounds checking.

Some of the for loops could be converted to STL algorithm calls.
Original code:

Other than using the std::string::find function, I opted to throw an exception instead of returning -1. Throwing exceptions from what I understand if fine as long as it's not in a hot path, and loading INI files at the beginning is not considered a hot path. You aren't always checking the return values of these functions so errors can still slip through the cracks.

You have a lot of work put into the code so far, so I don't expect a refactoring of it. Going forward, I'd suggest using more of the language features and the STL library. There is a lot of code duplication between the Sprite and Graphics classes, and I understand why since you may want to procedurally generate a sprite. One way to handle this would be to use inheritance where your base class would have all the draw functions and your derived classes ( Sprite and Graphics ) would implement the putPixel function(s). Another way would be to use templates and a common interface class. Some graphics libraries ( Direct2D for instance ) would call this a RenderTarget class. All the draw functions would be in the template RenderTarget class and the putPixel functions would be passed on to the class used as the template parameter.

If you think paging some data from disk into RAM is slow, try paging it into a simian cerebrum over a pair of optical nerves. - gameprogrammingpatterns.com
Top

These are suggestions, take them or leave them. Your program works fine so far and it's better to get the project done I suppose than to worry about the little things. Chili's latest videos on HW3D kind of covers design. Do it as dirty as you want to get the features working, THEN go back and make it look better and act safer.

If I find/think of anything else I'll post here. Again, nice work.

With C++17 enabled in your project settings ( VS2017 or higher ), you can also add constexpr to the beginning of almost all your free and member functions. This means in some cases you'd be able to do some math during compile time. There are other reasons to declare them as constexpr, but a little complicated and I don't fully understand all of them.
If you think paging some data from disk into RAM is slow, try paging it into a simian cerebrum over a pair of optical nerves. - gameprogrammingpatterns.com
Top

Can't believe I missed this one:

Functions in the standard library that begin with an underscore should never be used. These are library specific and may change with different versions of the library. In fact, it apparently did or this function has been moved to private in later versions of the library than you originally used. When I updated the SDK to use the Win10 version of the STL this function was no longer accessible.

The correct way is to use the std::vector::erase(firstIterator, lastIterator) member function that takes a range.

Also, just found some nice and useful notes you left yourself about inheritance and smart pointers. There is one note there that is semi-inaccurate.

- As arguments to a function, pass unique pointers by reference, unless you need to
- transfer ownership, then transfer by value

If you think paging some data from disk into RAM is slow, try paging it into a simian cerebrum over a pair of optical nerves. - gameprogrammingpatterns.com
Top

Consider using the C++ random library instead of srand()/rand() -> #include <random>
Consider using the C++ chrono library for timer related code.
Looks like C++20 will bring calendar and wall clock time functionality to the chrono library.
If you think paging some data from disk into RAM is slow, try paging it into a simian cerebrum over a pair of optical nerves. - gameprogrammingpatterns.com
Top
Post Reply
55 posts