The Partridge Family were neither partridges nor a family. Discuss.
Post Reply
26 posts

Okay, well after finally finding where I can download VS 2015 and downloading and installing it, and downloading and installing CMake GUI, and realizing I also need to need to download and reference in CMake something called "DevIL" (WTF is that??), and spending forever trying to figure out what to reference in the CMake GUI, I finally have been able to run the OPTIX demo solution in VS 2015 !!! Here's a screenshot of one of the intermediate samples where you they generated 3 meshes and did a brute-force ray tracer. And the command window even gives you info about installed graphics cards and frames per second.

OptixSample.PNG
(130.1 KiB) Not downloaded yet

I've noticed that often I run up against this BS about only supporting the older VS 2015 versions, and/or older CUDA versions, etc. 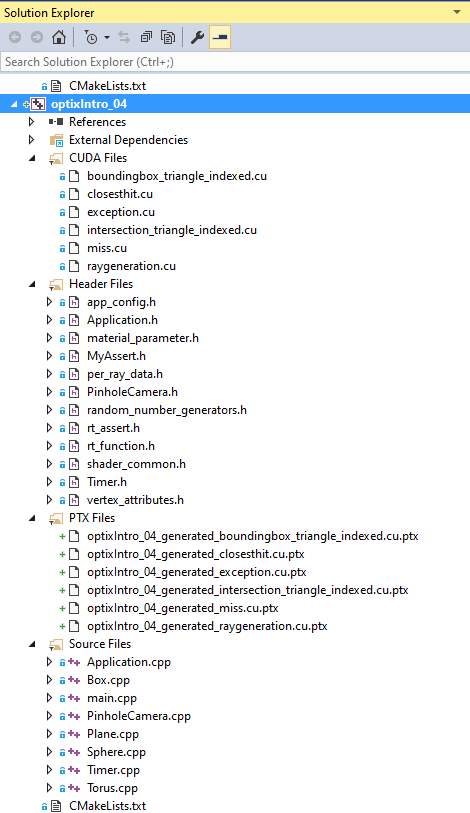 Oh, and another by-the-way:

Speaking of stiffy-inducing, here's a screenshot of all of the header, source, etc. files that comprise that demo app. It does scene generation, ray tracing, making a window and rendering to it, configuring and using IMGUI, generating code metrics and GPU info, doin' all that CUDA stuff, etc. And you can even adjust the objects' colors/albedo with IMGUI sliders, and zoom the camera view using the mouse wheel. Freakin' amazing. Everything I've been wanting for many months.
Top

I personally haven't run into an issue with devs/library authors not at least making a VS2017 option for the CMake builds. I suppose what you could do is go ahead and make the CMake build for VS2015 then just open in VS2017/VS2019 and update the SDK and build version.

I really do hate CMake though, but it's more because I haven't taken the time to learn it. I can at least use the CMake GUI well enough for my own needs, but that's about it.

It's unfortunate that CUDA is the route you and many others take as it is part of a closed system ( vendor restricted ). It is also unfortunate that aside from DX12 with raytracing is the only vendor agnostic alternative that I know of, but it is OS dependent ( Windows 10 with the May 2019 update I think ). I'm not sure if Vulkan has or will follow suit, but it would be nice I suppose.
If you think paging some data from disk into RAM is slow, try paging it into a simian cerebrum over a pair of optical nerves. - gameprogrammingpatterns.com
Top

Not sure what the concerns are surrounding CUDA and "vendor restricted", but I imagine for many of us those concerns are somewhere between unimportant and totally irrelevant.
Top

EDIT: Sorry, I keep forgetting this is for your own personal learning experience. Since you do apparently have an nvidia card, it's of no concern to you. I was merely stating my frustration in general and not directed toward you specifically that a few people on here have gone the CUDA route. I'm guessing it's because they not only have nvidia gpus, but because there is a lot more learning resources for domain specific topics they are interested in that have been done by nvidia's software engineers, raytracing being one of them.
If you think paging some data from disk into RAM is slow, try paging it into a simian cerebrum over a pair of optical nerves. - gameprogrammingpatterns.com
Top
Post Reply
26 posts