by orange3
So, a few days ago I was on lesson 3 and then had to stop, so I've basically forgotten whatever it was that I had done to cause this, but I was creating the const bool condit = wnd.kbd.KeyIsPressed(VK_UP); part. I try running it, and it immediately takes me to the main.cpp program with hundreds of errors. After what seemed to be an hour of going back and forth from the video, I'll likely have to reinstall and start over since with my skill level I can't even read what the errors are pointing towards to do anything helpful. But that's where a question came up out of frustration since "It was hard enough to make time out of my busy schedule and slowly making progress working on this and now because of this bug I have so start aaaaalll over" I wanted to ask the experience of other programmers when debugging drills a hole straight through what was already a slippery learning curve How did you deal with bugs as a beginner when everything is new, you barely grasp syntax and what it does, and nothing makes sense? While the obvious answer would be to try again, when I'm working on an hour of code each day slowly trying to make something despite time and it crumbles, it can get a bit demotivating, but it will be a while before I learn the skill of debugging and right now I'm just trying to write and learn things but..AAHHH. Sorry for the diatribe. 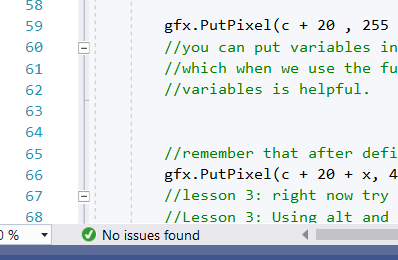 here's the file if you want to try and fix it: https://ufile.io/4pwygcvd

by AleksiyCODE
Well, I might be able to help despite being a beginner myself.
First of all, you give a link to .sln file, but this file along is no use (try opening it yourself with Notepad and make sure that your code isn't there).
There is a page on Chilipedia on how to ask for coding help, so check that shit out https://wiki.planetchili.net/index.php/ ... ili_Forums
And secondly (i might be wrong), it seems there are no errors in your programm. You are just triggering a breakpoint (that red circle on the left of your code) (line 35 on your screenshot). Try removing it (and other circles if you have them) by clicking it.

by chili
Yup, you clacked the wrong place and set up a breakpoint by accident

If you're really buttfucked over this one, just skip over to Tutorial 7 and you'll learn about what this shit is all about.

by albinopapa
To answer the other part of your question, about how to deal with the frustration or how to deal with getting lost in code, I had the same thoughts but with a lot more time on my hands than an hour a day.

Bottom line, don't lose hope. Learn the tools you are using on top of the language ( C++ ) and some other cool things master chili will teach and you'll get there eventually. Learning to code could be as quick as 4-5 months like Yumtard or 4-5 years like me lol.
All times are UTC
Page 1 of 1
Powered by phpBB® Forum Software © phpBB Limited
https://www.phpbb.com/